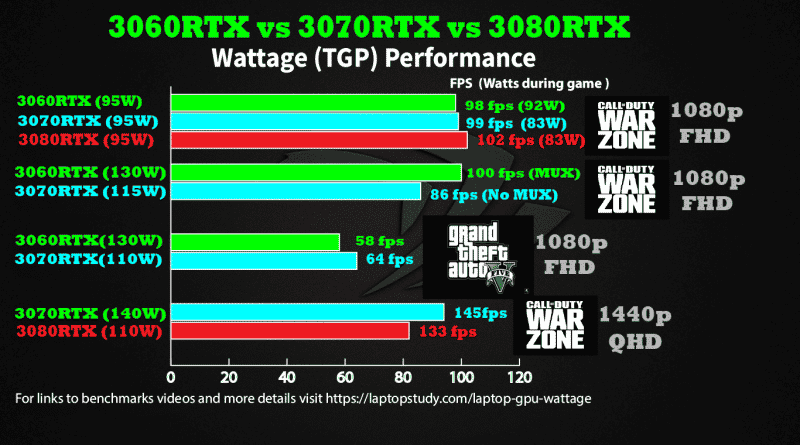 The number one MOST IMPORTANT SINGLE SPEC in a gaming laptop is the laptop GPU TGP ( can also be called laptop GPU Wattage ).

Most websites call it TDP instead of the TGP.  The correct term is TGP.

The idea is the same though:

What is GPU TGP ? What’s the difference between TGP and TDP ?

TGP stands for Total graphics power: the total amount of power that goes into the whole graphics card board as shown below. 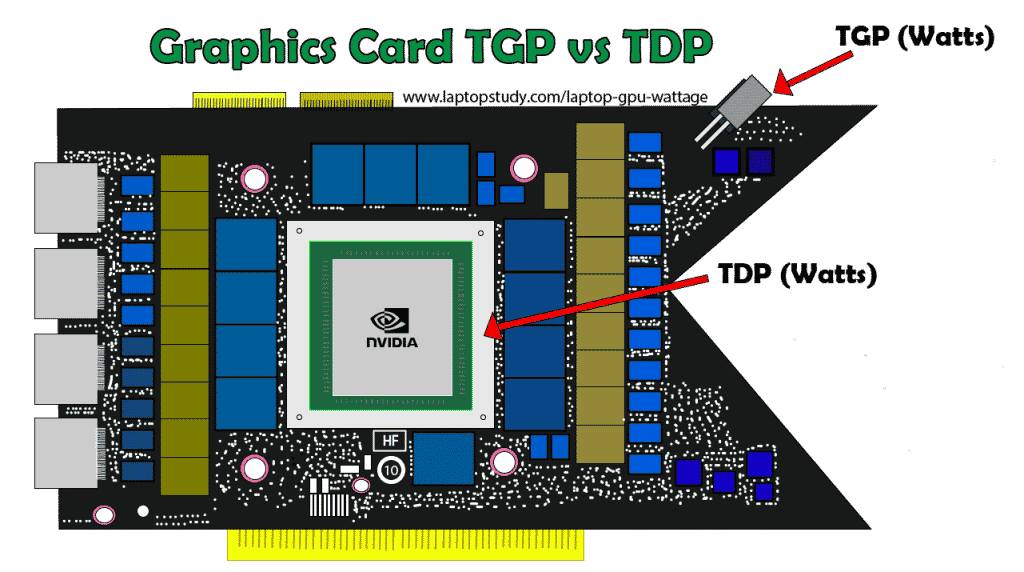 That’s what manufacturer’s list on their websites when you check out a laptop’s description or when you check the official PDF specification file of gaming laptop.

TDP (Thermal Design Parameter or Power) is basically how much power goes into the graphics card chip
shown above.

TDP is a useful term for engineering purposes but not so useful when you shop for laptops.

Note: We’ll use TGP and Wattage to mean the same thing

The idea is the same…

The table above is probably the most useful piece of information you can get if you are newbie to gaming laptop’s GPUs.

Just beware of the differences in wattage ( or TGP) when you buy a laptop because even a little goes a LONG LONG way when it comes to performance.

How much difference does GPU Wattage make?

It depends on the game but the difference can be enourmous in most cases. We are just going to take battlefield V as an example. 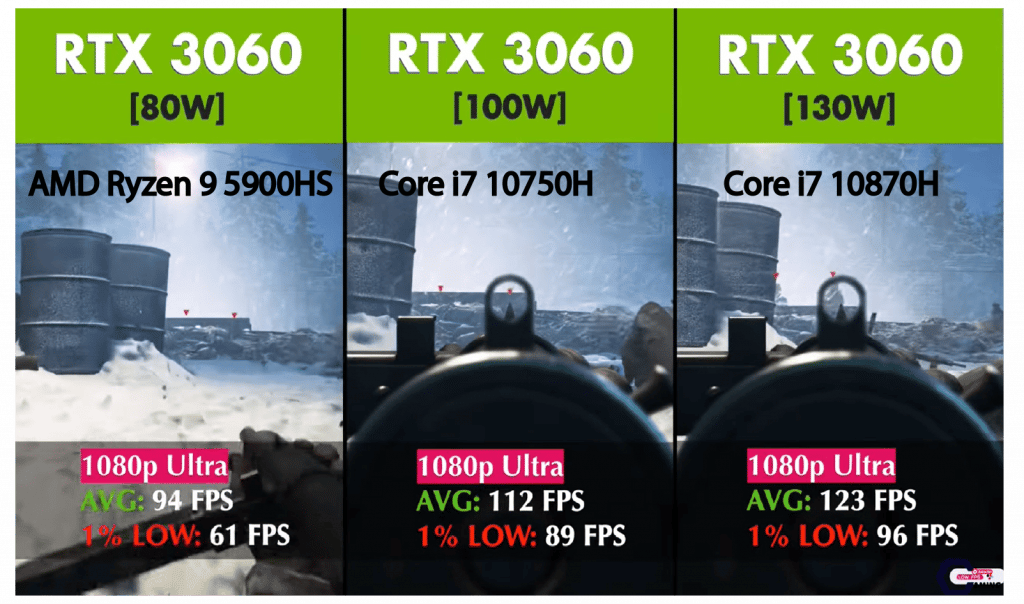 But you can check other dozens of games and benchmarks on youtube. The one we chose is here.

In other words, the FPS difference between the 3060RTX (80W) and the 130W would be much much bigger if it weren’t for the disparity in CPU speeds.

*Note that NONE of these laptops have a MUX Switch. If you don’t know what that is, you can read it here but basically there’s no other performance advantage between the three laptops. They all have the same RAM, no MUX Switch,  same hard Drive.

This is a much more interesting comparison.

What does this tell you?

Exactly what we said at the beginning of this post: GPU Wattage or TGP is the single most important factor for high performance.

Now some people may claim that the difference can’t be that big there must be some settings changed or the maps are different so one may be more hardware demanding than the other.

That’s true but the one that’s more hardware demanding in this comparison is the one where the 3060RTX because it is sort of an open field where you have more stuff to render.

MUX Switch: What it’s true though is that the 3060RTX has a sort of an advantage over the 3070RTX: it has a MUX Switch which increases performance by 15%. You can read more about it on my MUX Switch post here.

What TGP is Good for a given a GPU?

If you are after high performance, you want to avoid TGPs that are too low for a given GPU.

Before we go through the benchmarks you have to understand the concept of dynamic boost:

What is dynamic boost?

Dynamic boost will automatically raise the power consumption of a GPU (basically increase GPU wattage) to increase performance WHEN needed.

It’s usually NOT done for games that are not graphically demanding like League of Legends, Dota 2 and so on UNLESS you set resolutions to 1440p or 4k. 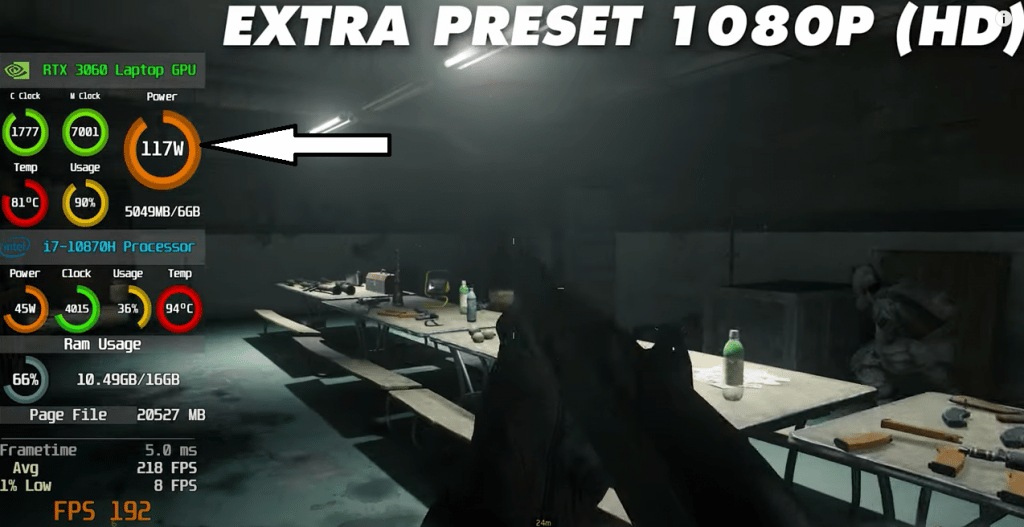 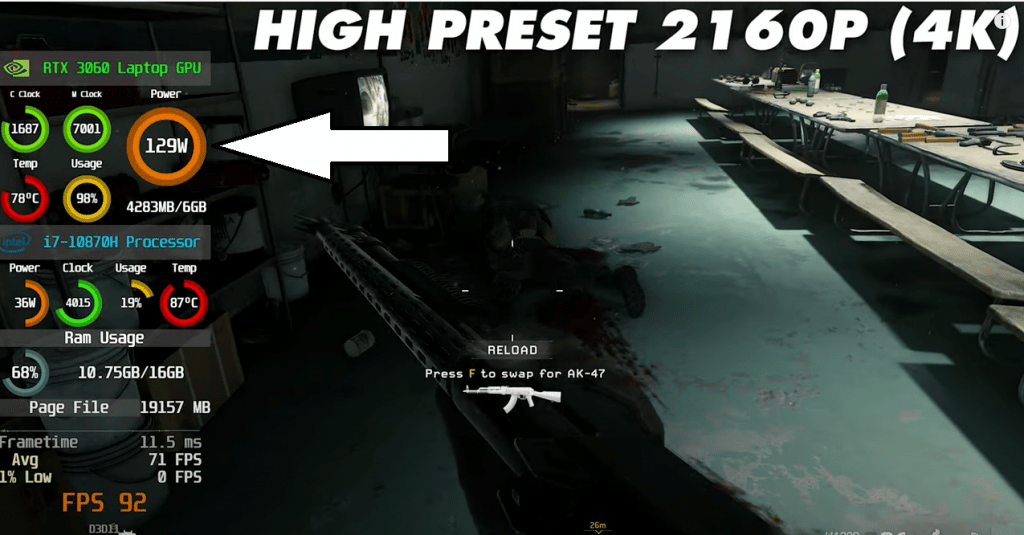 At much higher resolutions or on games with much more graphics like Call of Duty and Battlefield V, maximum wattage will be activated.

That doesn’t mean every laptop can dynamically boost to maximum wattages.

A 3060RTX will not always dynamically boost to 130W. That will depend on its maximum TGP.

This would be usually be represented by:

Let’s see some benchmarks so we can draw some conclusions on GPU wattages.

All three laptops above have the exact same hardware, they’re the same model so they have the same CPU, same RAM and so on.

The 3060RTX does not boost to 95W as the 3070RTX and the 3080RTX do. So there’s going to be an obviousy difference on most games. However, even so the difference is NOT abysmal for 1080p gaming and for games like Call of Duty, there’s no performance gain over the 3060 RTX

Now we want to test at what wattage does going for a 3070RTX becomes useful for 1080p Gaming.

For this benchmark to be accurate you want to only include graphically demanding games that will force either GPU to go full wattage.

The 3070RTX slightly outperforms the 3060RTX on most games and the difference is minuscule on some games like Witcher and GTA. .

100W 3070RTX slightly outperforms the 130W 3060RTX. Meaning you cannot settle for anything lower than a 100W 3070RTX and you may want to higher as the performance difference is only about 5-10fps on every game.

The video below contains both 1080p and 1440p. We’re going to use the 1440p benchmarks because that’ll force both GPUs to go full wattage as 1440p is more hardware demanding.

Thus we can say 3080RTX is only worth the extra cash (assuming you’re after gaming performance) once you go past 110W. At least 125W I’d say. Otherwise a much cheaper 3070RTX running at full wattage will be a better choice. 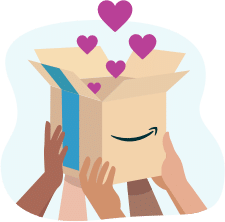 We may earn comissions from the products you buy however we urge you to use “smile.amazon.com” instead of “amazon.com” when you shop for something.

That way, 0.5% of everything you purchase will be donated to a Charity of your selection.